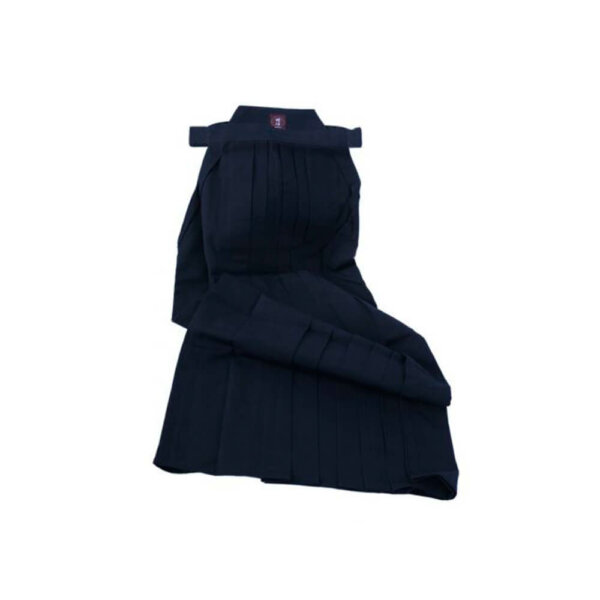 Hakama for Aikido imported from Japan. Embroidery supplement 15 euros: if you want this option, write us info@hajimekarate.com

The Hakama Meiji offered by Hajime Karate, is a high-end model. It’s a classic model, made in Japan. Meiji is the brand chosen by the prestigious Aikikai Foundation in Tokyo.The Hakamas are traditional Japanese pants. They were originally dressed on a kimono by members of the upper classes. Its use dates back to the Heian period (794-1185), when the women of the imperial court used culottes as the base layer of their kimono that resembled a Hakama. However, during the Kamakura period the warrior class began to use hakama commonly. It was used as a protection for riding. The Hakama was then a symbol of power as the standard costume of nobles and samurai. This became one of the most common types of pants for the village. The use of Hakama in Aikido: Given the relevance that the founder of Aikido, Morihei Ueshiba, gave to this garment is not surprising that he preserved the Hakama in this martial art. The Hakama was mandatory at first, from the first day, then optional during and after the war because they were not cheap, and finally only the men of the first dan and the women of the 3rd kyu in the Aikikai, although those rules suffered many variations. These variations depend on the style, dojo or Sensei. The hakama is carried in different martial arts, however in Aikido presents a specific design, handmade. Morihei Ueshiba used it daily. At one point, Aikikai Hombu Dojo asked a Judo specialist located near the dojo, Iwata Shokai, to manufacture Aikido equipment. This specialist didn’t have the knowledge and skills for Hakama, so they tried their luck in Tokyo. This workshop in Hakama, designed hakamas for Kendo, Kyudo, Ido, and even Sado (tea ceremony), etc… Over the years, martial arts gainedpopularity and with the rise of numerous orders, new companies specialized in making artisan hakamas, among them Meiji, were created.